Riding in cars with boys 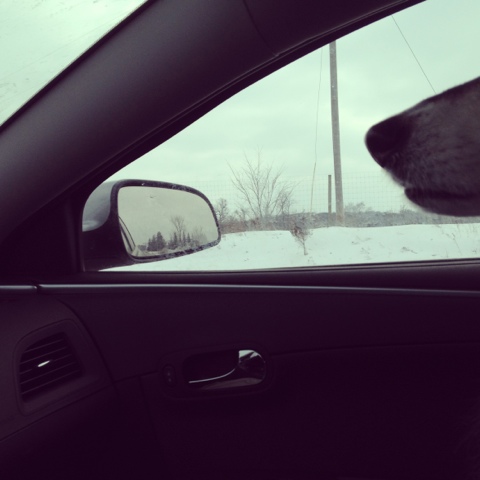 Posted by Anne Frasier at 5:08 PM No comments:

Forty Press and Once Upon a Crime Classics


The newest print edition (trade paperback) of Before I Wake, published by Forty Press, has the honor of being the first book to be released as a Once Upon a Crime Classic.  The Penguin/NAL edition came out in 2005. Up until that point, my Frasier titles had been set in cities and were fairly traditional police procedurals. This time around, editors asked for a rural setting. Once you move a story from a city, and once you add isolation, the tone changes and the book begins to feel a little like horror.  Before I Wake is a mixture of psychological suspense, thriller, and a little bit of horror.

I think the Forty Press cover is a HUGE improvement over the original cover, which looked like romance. In fact, I love the new cover: 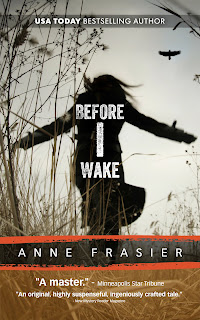 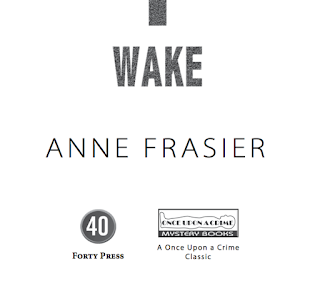 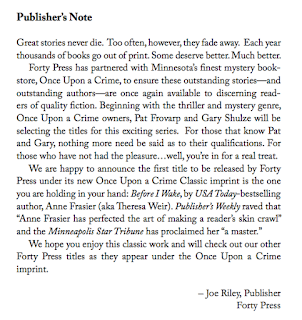 Forward by Gary Shulze of Once Upon a Crime:


Once Upon a Crime Series Editor Note
Looking through reviews and blurbs of Theresa Weir’s books (aka Anne Frasier) in preparation for writing an introduction to this edition of Before I Wake, I was struck by the consistent use of the best in adjectives: Gripping, Chilling, Clever, Engrossing, Brilliant, Heart- thumping...you get the idea. These and more apply to her entire body of work. Many of them I used myself back when I reviewed books for Crimespree Magazine. (I jokingly say that I had to quit reviewing because I ran out of adjectives.) One of my favorite review
5
assignments back then was to review Before I Wake in May, 2005. In that review I wrote “...Anne Frasier...once again demonstrates her mastery of atmospheric suspense.”
I wasn’t the first, and surely I won’t be the last, to describe The- resa as a master. She is fluent in a whole range of genres: Romance, Romantic Suspense, Crime Thriller, Psychological Suspense, and Horror (sometimes combining a bunch of them in the same book) while winning a batch of awards along the way. Plus, she wrote a knock-out memoir, The Orchard (2011)—a book that puts the “heart” into “heart-wrenching.” In a word, she is a “master” of the craft, and an author to watch, and of course, to read.
So just what does a master of atmospheric suspense do? With apparently no effort, she manages for you not to just visualize a scene, but invites you in as a participant—often with long-lingering effect. In Garden of Darkness (2007), there is a simple scene of dried leaves blowing across a road. Something you see any given day, but forever- more something I’ll be seeing with fresh eyes and ears.
In Before I Wake, as Arden walks us down the halls of the Mad- eline State Lunatic Asylum—now a psychiatric research unit-cum- nursing home—you can hear the floors creak. And during the book’s incredible finale, which takes place at the Arden family farm during a pounding blizzard, you just may want to bundle up.
We at Once Upon a Crime have been honored to have hosted publication launch parties for all of Anne/Theresa’s books. She is thoroughly delightful and we love her to death. She also makes our skin crawl, and scares the crap out of us.
– Gary Shulze Once Upon a Crime Minneapolis, MN January 22, 2013

I will be attending the CrimeSpree 50th Issue Party at Once Upon a Crime this Saturday, February 22, so if you'd like a signed copy just give Gary and Pat a call.

Print versions of Before I Wake can also be purchased from any bookseller.

Posted by Anne Frasier at 5:56 AM No comments:

WHO DO YOU WRITE FOR?

Who Do You Write For?

Mine, mine, it's all mine:  I have to admit that I'm always shocked whenever I hear writers say they write for themselves.  Some even go so far as to say that to do anything else would be an insult to the creative process and art itself. I understand that way of thinking, but I rarely write for myself. I write for myself in the fact that I like the feeling of accomplishment writing brings. That's for me, but as far as the story goes…  I write for the reader. Mostly. Unless I get sidetracked.

The editor's book:  This is a trap many writers fall into when under contract, because at that point we're writers for hire.  We are being paid to deliver what the editor and publishing house want. We quickly learn an editor's likes and dislikes, and we begin writing to that editor's tastes, in part simply because the process will be easier if we can satisfy the editor.  Some editors won't have it any other way. It's their way, or no way.  I can name several books I wrote for an editor. Problem is, I don't feel these books are as good as the books I didn't write for an editor.  And if I go by sales and reviews, I think readers would agree with me.

The protest book:  Oh, I've written A LOT of these.  Telling me I can't do something is like waving a red cape in front of me.  And I think the protest book tends to be the best book. These books are slammed by agents or editors, usually in the idea stage, but sometimes the slam is to the complete manuscript, or an early manuscript. Off the top of my head, five of my books were protests books. Going way back to the beginning of my career, my first protest book was Amazon Lily. An agent chewed me out for writing it, and she said I had no idea what a romance was. That inspired me. I throw fingers at that kind of thing.

Instead of taking her advice, I went the other way and added more of what she hated.  My next protest book was Cool Shade, which ended up winning a RITA.  That protest book was followed by Hush, Play Dead, and more recently, The Girl with the Cat Tattoo.  All protest books.  All condemned.  Hush was actually dismissed before it was written, so it wasn't a condemnation of the book, but of my writing ability.  Too complex for you.

I'm bored and need a challenge: This is something writers have to be really careful of, and these books, at least for myself, can be some of the worst books. What I'm talking about is that point where you begin to become bored with traditional structure and the expected. You want to challenge yourself, so you add some things that two books ago you might not have done.  (I think in romance we used to call this the sex on the galloping horse stage.)  As a creative, you want something new. Problem is, this kind of thing often leads to an unsatisfactory read.

The reader's book: I know, I know. Everybody says writing for readers is a bad idea, but I don't think it's a bad idea.  Why is it a bad idea? In fact, it seems like the best idea. With my current project, I'm writing with the reader in mind as I constantly try to figure out how to give the reader the most satisfying experience.  Of course I can only guess and hope I get it right, at least for the majority of the people who buy my next book.  When all is said and done, I'm a people pleaser.  I WANT to write for readers.
Posted by Anne Frasier at 12:26 PM 1 comment: 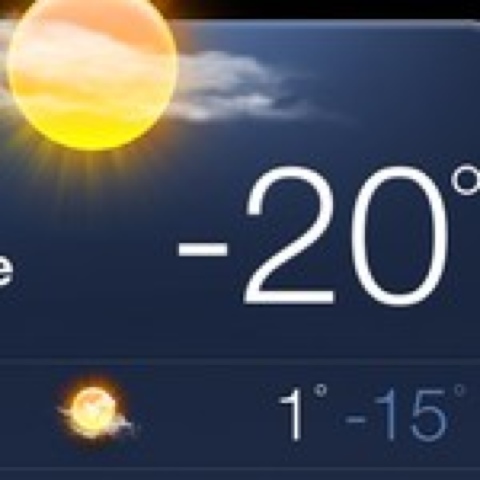 Posted by Anne Frasier at 6:12 AM No comments: