update 9/3/10: You can find the final temporary cover to the left (finalized with input from the publisher). Not sure if this is just a placeholder, or a design we will end up using for the actual cover. It will need a tweak and polish if we use it for real. At Killer Cocktails, information about the book will be in a brochure that is handed out to booksellers, media, book buyers, reviewers. Along with the cover image, I put together a short blurb that includes the names of all of the contributors, so it's good publicity for everyone involved! Last year was the first Killer party. I didn't attend, but I heard it went over very well and everyone enjoyed it, so I'm really looking forward to going this year! What to wear... What to wear...


I'm putting together some promo stuff for Killer Cocktails, a party that kicks off the Midwest Bookseller Association trade show. Too early to have a cover for the Halloween anthology, but I'm trying to come up with something that would work as a temporary cover.
Posted by Anne Frasier at 10:20 AM 11 comments:

Several years ago I was invited to be a part of a short-story anthology, and I reluctantly declined. I'd never written a short story before, and the idea terrified me. Didn't know if I could manage that kind of distilled writing. About a year later, I was invited to submit to the Once Upon a Crime anthology, and I said I'd try. I cheated a bit, because I actually expanded a flash fiction piece I'd already written.

Since then, I've written about eight short stories, and with each one I think I get a little closer to getting it right.

The circle. In my mind, the perfect short story looks like a circle. It circles back to the beginning. Most of my stories don't circle back, but I'm working on it.

A complete story. Unlike flash fiction, I think the best short stories feel complete. Even one thousand words. I want to feel that it's a whole story, beginning, middle, end. This is another thing I'm working on, because mine sometimes feel like a slice of life. A little window. And that can be wonderful too, but not as wonderful as the complete story.

Surprise and delight. I think a really good short story ends with a bang. This can be achieved with a twist, a revelation, humor, emotion. Close on the highest note. Again, I may have achieved this in a couple of my stories, but not all of them.

I'm sure there are guidelines for short-story writing, but I've never read any. Maybe I should. Or not. Any advice for writing short stories?
Posted by Anne Frasier at 9:53 AM 8 comments:

How can I blog when I have nothing to bitch about?

I refuse to say things are going well, because those words could set off a string of bad. So I won't say it. Instead, I will talk about the wonderful movie I rented through Netfix. 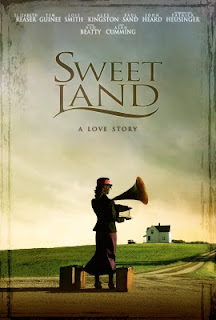 I wanted to attend the limited showing in Minneapolis, but couldn't make it. I vowed to rent it when it became available on Netflix, then promptly forgot it existed. So the other day I was going through indie films. What's this? It sounds intriguing. Oh, wait! I wanted to see that a few years ago. I think some of my poor memory can be explained by the totally forgettable title. One of those titles that leaves no imprint on your brain, so you can't even recall it the next day. But anyway, title aside, a lovely film. Gorgeous film, gorgeous cinematography with music that was perfect. Perfectly cast. Not a lot of plot, but that didn't matter. Too much plot would have gotten in the way. I loved this so much that I plan to rent it AGAIN. Definitely the best movie I've seen in quite a long time. But I do have a soft spot for distilled rural American stories set in the 1900s. And it also echoes my memoir, a familiar story of the land, the passage of time, and two people who hardly know each other. I think the last indie I was this passionate about was Wisconsin Death Trip, also a visual delight.

Sweet Land
Posted by Anne Frasier at 10:53 AM 2 comments:

When the past informs the future

Back in the early nineties I wrote a proposal that my agent rejected. It was one of those books of the heart, something I really wanted to write. The proposal was three chapters and a long synopsis, plus artwork. It went something like this:

Setting: rural farm
Main characters: female who’d moved away, became an investigative reporter, had a baby, got divorced, developed cancer. Story opens with her in remission, returning to the farming community to rest. She ends up attending funeral of old male friend whose father just died. The male friend draws the wrath of the community because of his stand against pesticides. The two join forces to expose some dirty doings, thus endangering their lives. Murder! Love! A cute toddler! Danger! And more!

My agent turned it down, and I was devastated. Just stunned and shocked, my spirit crushed. Because the story had meant so much to me, and had come from my heart and my life. Fiction, but I was drawing from everything around me. That was the first time my agent flat-out refused to submit. He suggested I work on something lighter. So I put together a proposal for Cool Shade, which is kind of a dark comedy. This was my option material, and the publisher turned it down. They said they were looking for something darker and more mature from me, maybe a story of a divorced woman facing some kind of hardship. Hmm. Sounded a bit familiar, but with the rejection of the option material, the relationship with that publisher was over.

And this is the thing.

I’ve moved several times since writing the agent-rejected proposal, and in later years I’ve come across that proposal while packing. And every time I’m struck by how good it is. And I came to finally understand that it was by far the best thing I’d written during that period of my career, but it took years for me to be able to see it for more than a failed piece of shit.


So when I turned in The Orchard and my agent said it didn’t work for him and it would never work for him, I remembered that other story, a story that was similar in tone, the one I later realized was good. That knowledge led to my decision to move on and try to find another agent. Because I knew we’d made a mistake fifteen years earlier. I knew he could be right this time, but I couldn’t take the chance.

I’d been with my agent for twenty years. He’s a fantastic agent and he made a lot of really good moves for me, so I was out of my mind with the thought of having to leave him. And after leaving him, I made a poor decision, but it was brief and I now have a wonderful agent who is a treasure. OMG. So amazing. But the problem is, you just don’t know until you are in the relationship. You just don’t know. And I keep thinking that if I hadn’t had that earlier disappointment accompanied by the later revelation, I probably wouldn’t have moved on and The Orchard would just be another manuscript to come upon every time I pack and unpack.

I don’t know why I’m rambling about this. Just something that’s been on my mind. I guess it underscores just how without sense and how almost chaotic this business is. How even some of the sharpest people aren’t right all of the time.
Posted by Anne Frasier at 8:58 AM 6 comments:

I don't know how editors do it. Editing a full manuscript. It's so intense and physically demanding. Just so much work, so much sitting, so much peering into a tiny screen and trying to read your own edits in a tiny little edit bubble. For me, a freelance manuscript edit takes 30 - 40 hours, and I try to complete it in a week or less. So physically demanding. When I write, I'm up and down all day long. Write a paragraph, wander away from computer. Jot something down on paper. Figure out what I want to do next. Go type it. I'm not really that attached to the computer throughout the process.

So anyway, to get to the point, and I do have one, I've really enjoyed working with LK Rigel on a couple of projects. For several reasons, one being that she's a great writer and a joy to work with. (Linda is a contributor to the Halloween anthology coming out September, 2011). Another thing -- she sends me about twenty pages at a time. The magic number for me! I love doing a content edit on these small sections. I'm a sprinter.

You can find the first two chapters of Space Junque on Smashwords. Free! Check it out!
Posted by Anne Frasier at 6:47 AM 7 comments: