I'm still on the mend, but popping in here long enough to post the cover for Bad Karma. I think it's adorable! 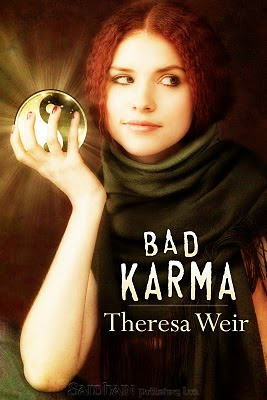 She had no idea what she was looking for…until it found her.

Officer Daniel Sinclair can spot an outsider a mile away. He ought to know—he’s the worst kind. A natural-born native of Egypt, Missouri, who left home and came back citified. Even before he lays eyes on Cleo Tyler, his L.A.-honed suspicions tell him the psychic hired to locate Egypt’s missing master key is a fraud. She also possesses a soft, exotic kind of beauty that sets him on edge.

Cleo’s used to dealing with skeptics—in fact, she is one. She longs to believe abilities like hers don’t exist, yet she can’t explain the odd glimpses into other people’s lives, nor the terrible flashbacks from her own past. She’d like nothing better than to put on a good show, collect the money, and hit the road. But behind Egypt’s quaint façade is a chill she can’t shake, and a powerful attraction to Daniel that’s stronger than her increasingly desperate need to run.

Cleo more than makes Daniel uncomfortable. She sets him on fire—and sees right through him. And right through the town’s charming veneer at something so deadly, her next vision could be her last.

This book has been previously published and revised from its original release.

Warning: Contains explicit sex, explicit fantasies, explicit visions, a to-dream-for alpha hero and a heroine who teaches him to lighten up.
Posted by Anne Frasier at 12:38 PM 14 comments:

BATS IN THE BELFRY anthology 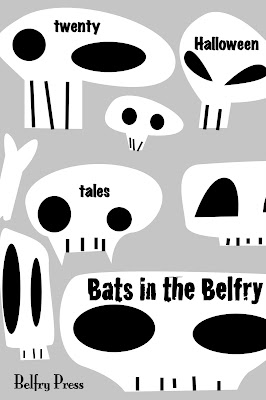 The Bats in the Belfry anthology is moving along nicely! So far I've received about half of approximately twenty-five (pay no attention to number on above cover) submissions, and expect the rest within the next two months. I'd originally planned to publish this myself, but the stories have knocked me out, and I now plan to submit the anthology to real publishers.

What variety! A couple of the stories are laugh-out-loud funny from beginning to end. Others are more along the lines of crime fiction. Some moody and sad and dark. Some paranormal. This is going to be an awesome anthology. On the bummer side, I've had to turn down a couple of stories. That was tough, especially since I issued the invitation. But contributors raised the bar, and I readjusted my expectations and hopes for this project. I might have to do this again, because it's been fun and rewarding.
Posted by Anne Frasier at 9:52 AM 9 comments: 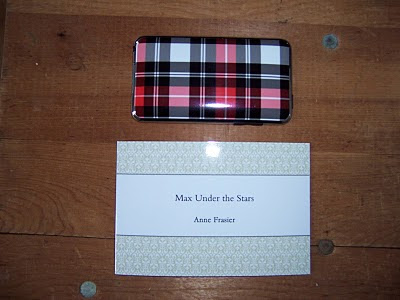 While putting together the short story for my storycard venture, I also tinkered around with Lulu. They have a new design wizard that can be used to create tiny poetry notebooks.

The bad: You don't have a lot of control over the text, and none over the line spacing. This really should have been spaced at 1 1/2. Some indents are slightly off. 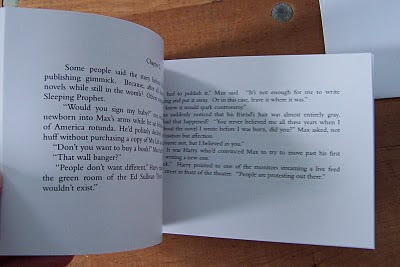 It seems when something starts going screwy, it's hard to change or correct. Another bad is the cost. 7.00 each, and you have to buy in a pack of 3. If I'd purchased 20 packs of three and used a 20% off coupon, each tiny book would have cost me around 4.70. Not quite as bad, but that would have been a total of 60 books. Doubt I'd ever need 60. And because they come in packs of 3, how do you sell them through Lulu or anywhere else? Or give them an ISBN? Don't think you can unless I'm missing something.

The good: Well, it's pretty easy to upload material and images to the poetry template, and very cool that every page can include an image. So I could see this being a simple, handy tool if you wanted to create a story with images or artwork.

The poetry book feels good, and I think the tactile element is important when talking about print material. Nice cover. Nice paper. Nice size. Thinner than my iPod Touch, and it will fit in a small envelope. 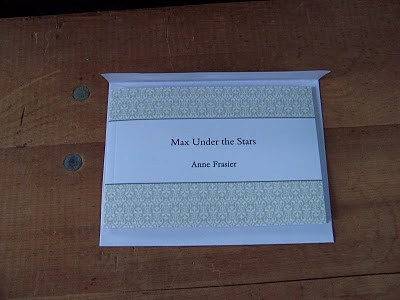 please note: The poetry book can be formatted in several different sizes; I chose the smallest.


It has a real binding, not staples. But IMO, it just cost too much for anything more than something you might give as a gift. Could definitely make an interesting Christmas newsletter.

But if I had young kids -- OMG. They could write a story and illustrate it. I think that would be the coolest, coolest thing.
Posted by Anne Frasier at 1:37 PM 2 comments:

So let's see if I can explain this. Not sure I can, because it's kind of a mystery to me. How does a book end up translated and pubbed by a foreign publisher? In my case, the original book is sent from my agent to an agency in London, and that agency submits the book to UK publishers. Once a foreign publisher contracts the title, they are responsible for hiring a translator. These translations can be horrible, or they can be amazing. I've had Swedish friends tell me the translations of my Swedish books are pretty bad, and that the poetry of language really suffers. But the wonderful person who translates my German titles does an amazing job, and I credit him with much of the success of those titles.

Since my books were doing so well in Germany, I had an idea. What if I wrote some new crime-fiction titles exclusively for them? But unfortunately, this idea came to me about two years ago, and I no longer had an agent. So I thought, well, I'll go to the London agency. But when I looked them up online, I discovered they only represented US reprints, not originals. Foiled again. Without an agent, there was really no way for me to contact the German publisher and present my idea. I even contacted my old agency, but understandably didn't get anywhere. After thinking about this off and on for over a year, I finally gave up. Just didn't know how to proceed or who to contact. And unfortunately, the books should have been written two years ago to follow up the success of the previous titles.

Flash forward. I received an email today -- won't say from who -- asking if I might be interested in writing new books, not reprints, for the German publisher. Would I ever. Not sure if this will happen, and like I said, ideally the books should have been written way back when I first had the idea, but I so hope we can work something out.

PS: Just saw the cover comp for Bad Karma. So cute!!
Posted by Anne Frasier at 7:30 AM 2 comments: 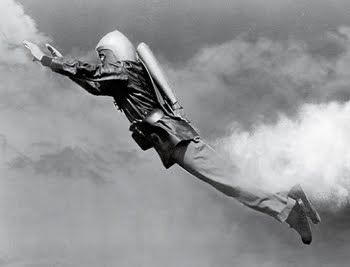 I have to take back some of what I said about Cool Shade. I got past the bad middle, and I can see where the book has quite a bit of merit. I think the plot is solid, but some scenes could be stronger, transitions smoothed, and it could benefit from some cutting of material that just feels awkward.
Posted by Anne Frasier at 4:09 PM 1 comment:

So I've been working on this little project that I suspect will be no more than a hobby. I've always enjoyed crafts, and it's been fun putting together these little chapbooks. Coming up with just the right paper has been a challenge, but also interesting. Some of the prettiest paper doesn't fold well, and I'm still testing and learning.

With storycard, I combined my love of the short story with my loathing of generic and expensive brand-name cards. 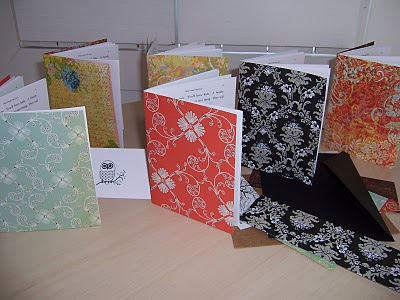 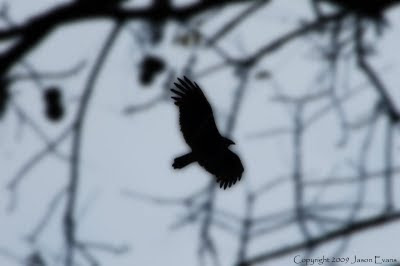 Yay! Jason Evans is holding another one of his hugely popular contests!


The Clarity of Night

Welcome to the 12th Clarity of Night Contest!! Before the post-holiday doldrums gain a foothold, let's get a little juiced up, shall we?

Here's how the contest works. Using the photograph above for inspiration, compose a short fiction (or poetry) piece of no more than 250 words in any genre or style. Send your entry to me by email at jevanswriter at yahoo dot com before 11:00 p.m., Wednesday, January 13th (Eastern Time, United States). I'd prefer attachments formatted in Microsoft Word (please see the format request below), but if you have something more exotic, you can paste the text into the body of an email (no docx formats, please). Each entry will be posted and indexed.

Now for the goodies. The following prizes are up for grabs:


But this is about more than prizes. I hope you take advantage of the opportunity to meet and interact with your fellow writers. Our different perspectives, styles, and skills shine when we all start at the same place. It's a great opportunity to learn from each other.
Posted by Anne Frasier at 3:03 PM 5 comments:

<<<<<<<<<<<<<<<----------------over here on the left.
love the pregnant woman cover, but it has a very contemporary look, and doesn't convey the fantasy element of the story. I'm never going to bitch about cover art again. It's hard to capture every element that needs to be captured. An editor once told me that the cover has to be able to snag a random reader's attention in something like a quarter of a second, so you not only have to portray some aspect of story, you also have to think of the shopper who is scanning a rack at the airport.
Posted by Anne Frasier at 5:28 AM 5 comments: