Deadly Treats can be ordered through any independent bookstore, and is also available through Adventure Publications, Amazon, and Barnes and Noble. 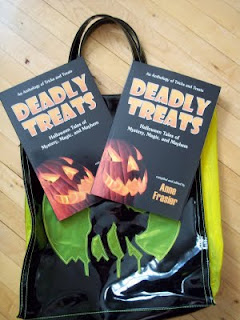 This anthology would make a great Halloween gift. The stories range from hilarious (Lance, Mark, Paul), to dark and slightly disturbing (LK, Stephen, Kelly). A lot of dark humor going on (Leandra, Pat, Marilyn, Julia), but some of the stories are just simply lovely (Patti, Bill, Heather). No other way to put it. Then we have the classic, flashlight-under-the chin pieces by David, Daniel, Michael, Jason, Shirley, and Paula, all perfect for reading by candlelight at a Halloween party or event.

And check out this wonderful review at The Occult Detective where the anthology is highly recommended: "Deadly Treats is an anthology that delivers and is a perfect companion for those long and lonely nights when the air turns chill and you bury yourself in a blanket on the couch, book in hand."

When a pickpocket begins to have serious health isssues, he finds himself contemplating a new line of work. If you’ve never read Patti Abbott, you’re in for a treat.

Ex-cop Skin Kadash spends Halloween day building a bat house with his neighbor, four-year-old Danny, while helicopters circle overhead looking for a murderer who might be hiding nearby. This wonderful story skillfully contrasts a lazy fall day with a brutal murder and police search. Bill Cameron writes crime fiction, and is the award-winning author of Lost Dog, Day One, and the recently released County Line published by Tyrus Books.

Sibling rivalry and a suburban Halloween decorating contest cause Kate to take a pitchfork to her sister’s yard display. Pat is a stand-up comic, popular writing instructor, publisher, and published author.

A young girl under arrest for the brutal murder of her cheating boyfriend attempts to convince the investigator that she is innocent, claiming the murder was committed by a ghost. David is an Edgar-winning author, and writing instructor at the Loft Literary Center in Minneapolis.

By the time Franklin Delacorte wakes up, he’s been dead six hours and is unsure of how he feels about his sons turning him into a zombie. When Franklin's behavior gets out of control, the boys feel compelled to undo what they’ve done, but Daddy knows best, and Franklin doesn’t want to stay dead.

Stephen Blackmoore has an uncanny skill for writing black humor, and World’s Greatest Dad is a hilarious zombie tour de force. Look for his upcoming DAW release, City of the Lost, January, 2012.

The anniversary of two deaths brings about the return of the Grim Reaper to Anya Madjigijik’s house on Cemetery Road. A haunting, moody, and beautifully written tale by this previously unpublished author.

It’s Halloween, and a food critic finds herself dining on chubby Boy Scout, mountaineer eyeballs, and sea monkeys. If Bram Stoker had written comedy, it would look exactly like this. Mark Hull’s Friday Night Dining is pure charm and delight from beginning to end.

A bitter, lonely woman spends Friday nights drinking cheap wine and entertaining herself by redialing the days unanswered calls to harass telemarketers. But she finally meets her match. Leandra is a multi-published, bestselling author.


8. Marilyn Victor, The Ogre of Her Dreams

Fledging witch Aurora Piddleworth wants a soulmate, and she blackmails instructor Olympia Dalrymple into creating the man of her dreams.

This is a clever, well-drawn, delightful story from beginning to end. Marilyn Victor is half of the crime-fiction writing team of Marilyn Victor and Michael Allen Mallory, known for their zoo mysteries.

A mother’s job is never done, and death is no reason to keep Daphne’s mother from looking out for her daughter. Julia Buckley always delights, and Motherly Intuition is a great showcase for her charm and humor. Julia is author of the Madeline Mann series

10. Lance Zarimba, Fangs and All

It’s love at first bite for Billy Joe Jim Bob when he brings his first vampire home in this hilarious and deliberately cliché-packed story. Lance is a multi-published author.

Feed your Muse takes on a whole new meaning when a writer has a breakdown on Halloween. A wicked, fresh, and clever tale by a talented writer.

It’s Halloween, and group of college students visit a graveyard in an attempt to reanimate a dead serial killer with a ritual found in an ancient book of spells. Kelly Parra is the award-winning author of Graffiti Girl and the more recent Carina Press release, Criminal Instinct.

13. Jason Evans, She Came on the October Wind

A stray black cat appears nightly at Natalie’s window, bringing with it memories of a sister who ran away years earlier. Jason is the author of the blog, The Clarity of Night, where he hosts and judges a popular flash-fiction contest.

Halloween is the one day of the year when alien Adeela can shed her costume and walk freely among the humans.

So what if you don’t have the right ingredients to cast a spell? Rachel buys a magic book from an antique store and uses household ingredients to bring Mr. Right back into her life. Shirley is the author of the popular Ophelia and Abby mysteries.

After a young man is reanimated, he has forty-eight hours to find a replacement for his empty grave if he wants to remain above ground. The best candidate for replacement is the man who murdered him. Anne is a USA Today bestselling author. Her memoir, The Orchard (Theresa Weir), hits stores September 21.

If you want a job done right, do it yourself. Or in the case of This Old House, never hire an idiot to burn down your home. Paul is a resident of Poland and brings a fun, unique voice to the mix.

A lonely widower discovers that his old Halloween pranks no longer cut it with the new generation of jaded kids who are too old for trick-or-treat anyway. But when an unexpected visitor shows up at the widower’s door, they hatch a plot the teenagers won’t forget. Michael Allan Mallory is the co-author of Killer Instinct and Death Roll.

When eight-year-old Tim vanishes while playing in Kids Playhouse, his best friend Manny must solve the crime and convince adults that there is more to Tim’s disappearance than a human abduction or childish prank.
Daniel Hatadi lives in Australia and is the mastermind and puppet master behind Crimespace, an online writing world for crime-fiction writers.

About a year ago I had 250 slides converted to digital files. I'd put it off for a long time because I was afraid to mail my slides anywhere. So nervous about sending off the only copy of something that could never be replaced if lost. So for a few years I went back and forth about it. Thought of doing it myself at home, but I knew I would have to set aside weeks to process everything. That just didn't appeal to me. I also knew that a lot of digital transfer places actually send the slides out of the country. That freaked me out all over again. I picked out about twenty choice slides and took them to National Camera in Minneapolis where they do the transfers onsite, but it was pretty expensive, and I knew there was no way I could afford to have them digitize 250 images. So after a lot of online research, I ended up settling on a place in New Jersey called Fotobridge. They were wonderful, and I highly recommend them. They let you know when your slides arrive, they let you know when they are being processed, they let you know when they've been shipped for the return journey. And they don't ship them to another country for the conversion. That was important to me. I think the whole process took about two weeks. Maybe a bit longer. Could have been closer to three from the time I mailed them until they arrived back at my door.

My plan had been to use the images to enhance blog posts about The Orchard, but I emailed a few images to my editor, and she suggested they use some in the digital version of The Orchard. They picked out about fifteen images that will be included at the end of the book.
Posted by Anne Frasier at 11:16 AM 2 comments:

EXCLUSIVE EXCERPT OF THE ORCHARD

"Like" The Orchard's Facebook page and read an exclusive excerpt!
Posted by Anne Frasier at 5:26 PM No comments: