There's been a lot of online chatter about Kindle sales figures, so I decided to post mine. Not sure this will help anyone because there are so many variables. One big thing to keep in mind: I do zero promotion, and that probably impacts my figures. I decided to spend my time writing and working on new material rather than focusing on my backlist. Another thing to note is that my reissues contain errors. I don't think they contain a lot, but they aren't error-free. The professionally formatted books have errors, the books I formatted myself have errors, the pirated copies have errors. Doesn't seem to matter. Yes, I downloaded pirated copies of my books and put them on Amazon. Thank you, pirates. But please try to do a better job of formatting next time.

FYI: The cleanest is probably PLAY DEAD, which I edited and formatted. 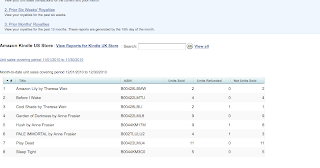 Do you have ebooks available on Amazon?

Please consider leaving your sales figures in the comment area. I'd really like to see writers come forward about their sales, especially those writers who have only sold a few copies. Making your backlist available in digital format takes a massive amount of time and can be a big expense. Is it worth it? Anonymous comments are fine!
Posted by Anne Frasier at 8:50 AM 4 comments:

WHEN FAILURE LEADS TO SUCCESS 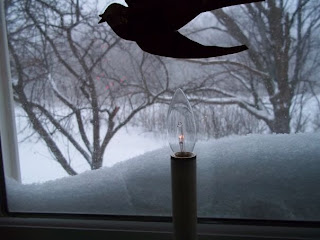 Or thoughts for a Sunday when I'm trapped by the biggest snowfall we've had in a gazillion years...


When life gives you lemons, make lemonade.
When one door closes, another door opens.
What doesn't kill you makes you meaner, stronger, meaner, tougher, meaner. (Or something like that.)

What do these lovely cliches have in common? I hate them all.

Even if they're kind of true. But today I was thinking about some of the fantastic writers I know who've experienced huge failures only to come out on the other side with major book deals. Some with movie deals. Does failure lead to success? In some cases I think it does. I think artists reach a point where there is nothing to lose. Nothing to risk, because we've already hit bottom. We've already lost everything.

Nowhere to go but up. There's another one. Hate it too.

Cream always rises to the top.


But I do think we develop this screw-you attitude. And also this sense of freedom. My god, the freedom! I'm especially talking about writers who've been dumped by their publishers. Taboo topic! Taboo! Is this a published author's biggest fear? I think it is. And we can't talk about it even though it's always looming.

Elephant in the room.

Once that thing happens that we've worried about from the moment we get up until we go to bed (I used to dream about getting dumped, and would wake up in the middle of an anxiety attack), there's no longer anything at stake. Nobody to please. Nobody leaning over our shoulders, breathing down our necks. Yes, it's terrifying, because there's nobody WRITING CHECKS, but we end up turning to the one person we can trust. Not an editor. Not an agent. Not our friends and family. Not fellow writers. Although all or some of those people are still around to support us.

We turn to ourselves. Through misfortune, we've been given the opportunity to shut off the noise and listen to our own voice for a change. That's where great art comes from.

What is your voice saying?
Posted by Anne Frasier at 6:12 AM 5 comments: