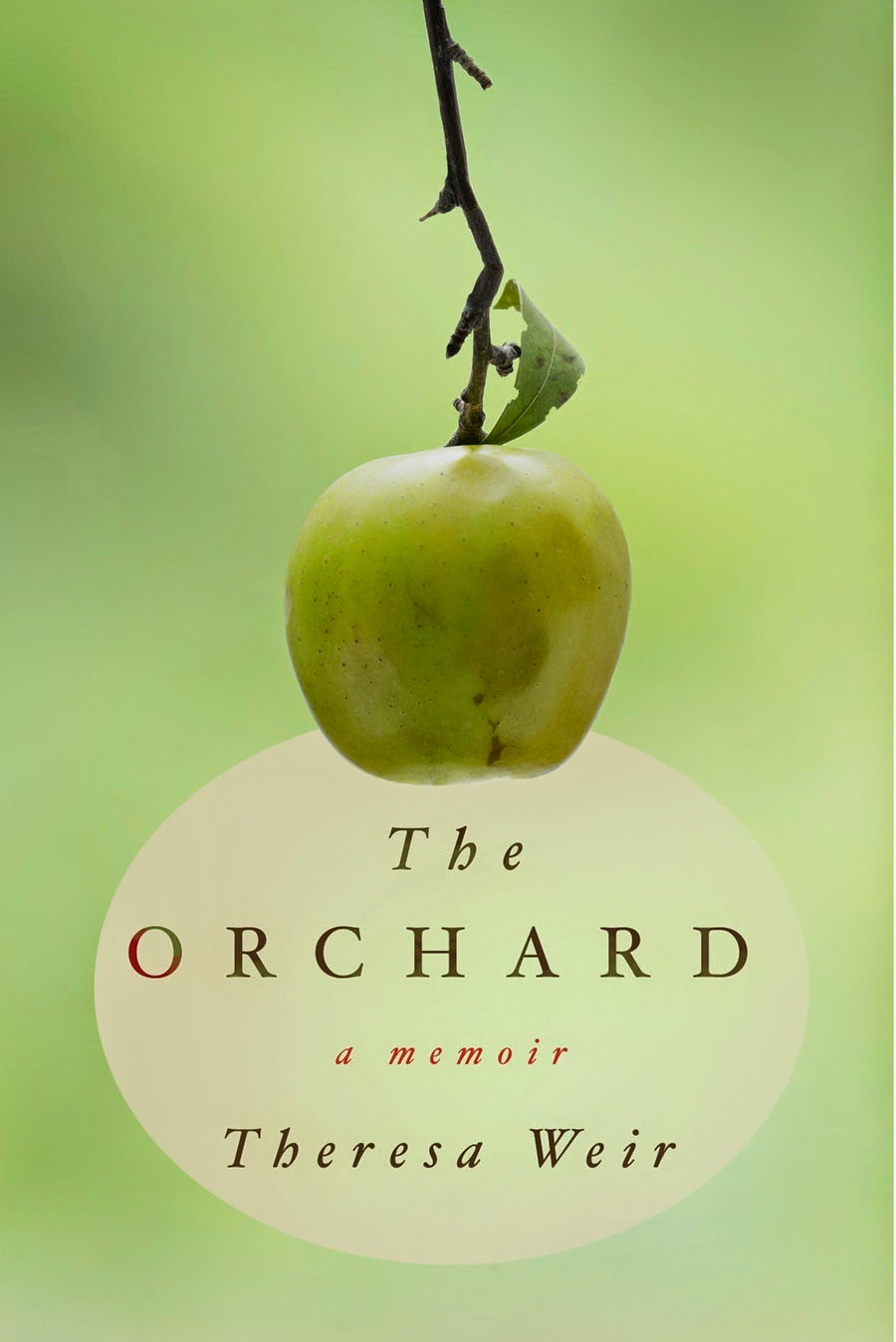 The Orchard is probably the most important book I’ve ever written. But little did I know that the nonfiction account of my life on an apple farm would be considered more compelling, more horrifying, and more thrilling than any of my thrillers.

Did you know that apples are part of the rose family? And like apples, it takes a lot of spray to create a perfect rose.  But the big difference is that we don’t eat roses.

The Orchard opens with a chilling story I used to hear when I worked at my uncle’s bar in Illinois.

Back in the seventies, herbicide salesmen traveled the Midwest and would put on these free feeds. Farmers would get a free lunch, listen to a sales pitch, and hopefully put in an order for chemicals for the upcoming season. At that time, one particular company encouraged its salesmen to drink the herbicide in order to demonstrate its safety. The salesmen would pour it in a clear glass and drink it.  This really happened, and you have to wonder if any of those poor salesmen are alive today. And did they believe that what they were drinking was harmless? Or were they desperate enough to do whatever it took to keep their jobs?  I think sometimes we simply convince ourselves that things are okay when they really aren’t.

I wrote this book to document 70s and 80s farm culture. I wanted to show people what a farm looked like from the inside, from the heart of a young woman.  But I think The Orchard speaks to everyone. We can all relate to wanting a beautiful life. We can all relate to the feelings of isolation and confusion, of devotion to a cause, of love of family. These are things that resonate with all of us, no matter our background or lifestyle. And we all respond to the path the human spirit takes when presented with danger and challenge.

I’m not the typical memoir writer. I’ve never liked to talk about myself, and I was happy writing genre fiction. But I’d had this unique experience that had taken place in a secret world known only to a small group of people, this weird and awful and wonderful life in which I’d married a farmer, moved to his planet, observed his culture, had babies, and returned to tell people about it.   Along with my experience, I had years of writing under my belt.   How could I not tell my story? As a writer, I felt an obligation to chronicle and share this life I’d lived.

The Orchard is really a tapestry of three stories, the story of surviving a challenging childhood, the story of a beautiful life inside a life, and the story of poor choices people make in seeking perfection.

While I was working in that bar in Illinois, a handsome apple farmer walked in and he began courting me in the most magical way. We went on horseback rides in the moonlight, picnics at the pond, and sketching in the apple orchard.  He welcomed me into his world, and I easily forgot that other people lived there.

Three months after he stepped into my uncle’s bar, we were married.

I was twenty-one and he was twenty-three.
I had this romanticized notion of getting back to nature and the land. I imagined myself barefoot with a baby on my hip, raising crops and canning organic vegetables. But farm life wasn’t what I’d expected. From the very beginning, from the moment I stepped foot on the farm, I was shunned as an outsider. My handsome husband began to behave in ways I couldn’t understand. And the farm itself, while beautiful and alive, began to reveal dark secrets.

I was told to stay away from certain areas.  “Don’t walk in the orchard. Don’t swim in the pond. When I asked why I shouldn’t do these things, faces closed, expressions became hard, and I got no answer.  I finally figured out it was because of pesticide contamination.  But nobody would speak the words aloud.

At night, pesticides drifted in our bedroom window while we slept. During the day, the poison coated the sheets and clothes I hung on the line. It was all around us.  I was horrified by what I witnessed, but I felt helpless to do anything about it.

It wasn’t just the horrors of pesticide use that I had to deal with, it was coming to terms with the realization that I would never belong on this farm.

Here’s a little snapshot from the book.
Shortly after we were married, my husband quit showing up for supper.  The evening meal is called supper, never dinner.  Dinner happens at noon, and is never called lunch.  But anyway, he quit showing up for supper, and when I asked him what he could possibly be doing out there in the dark, he scoffed and said I knew nothing about farming. I actually began to wonder if there was another woman.

One night I heard his truck, and I followed the sound, and knew that he’d pulled up to his parents’ house, which was a stone’s throw from our little place.  So I walked across their backyard and stood on the patio where I could see in the kitchen window. And there was my new husband —eating dinner with his parents. Yes, there was another woman. His mother.

Living in this isolated world, I began writing genre fiction, and my first book came out in 1988. During that time period, I attended a county fair. The local library was selling three hard covers for twenty-five cents, and I came home with a first printing of Rachel Carson’s Silent Spring.  I read it and began to wonder if maybe I could write about some of what I was witnessing on the farm, but I was told that nobody really cared what happened in the Midwest, and nobody wanted to read about farm chemicals.

But writing The Orchard was something I knew I would do some day; it was just a matter of how and when.

While living on the farm, I learned to assimilate into the culture. In spite of everything, my husband and I were able to carve out our own often-idyllic existence, and create the loving family I’d never had.

But at the same time, I was always aware of the darkness that surrounded us. This sense of threat. We might have been breathing poison and eating poison and drinking poison, but so was the rest of the country.  They just didn’t know it.

In the salesroom, apples were sliced and offered as samples, but workers weren’t allowed to wash the apples before cutting them. That might taint the warm, fuzzy feel of a trip to the apple orchard. Nobody wanted to be reminded of why their apples didn’t have spots on the skin, or worms inside. Customers just wanted an unblemished and beautiful apple.

When I finally started writing The Orchard, I didn’t think about the emotional toll it would take. Life (and death) on the farm was a past I’d worked hard to put behind me. It’s possible to recall an event for an hour or an evening, but immersing myself in the details for a year and a half was painful and daunting. And as I said, in the end the truth was more horrifying than any fiction I could ever write.

But I came back to something I’d been told in the eighties: Nobody wants to read about pesticides. Then I realized what I had was a dark, but true fairy tale, complete with the magical land, the handsome prince, the naïve bride, and the poison apple.

And along with the fairy tale was a message to the world about what was happening on farms throughout our country, a time undocumented and unexamined. I needed to document it. Examine it.  This piece of my life, this piece of seventies and eighties farm culture that still impacts all of us today.

Most of the events in The Orchard took place some time ago, but sadly not much has changed in the farming world. Apples have once again been named the most pesticide-laden fruit in the country.  But I no longer believe that people don’t care. I think they care, and I think they want to know, and I think they need to know what’s happening and what has happened.

I think it’s also important to keep in mind that farmers aren’t to blame. The market dictates what kinds of crops are raised, and how they are raised. Farmers couldn’t sell imperfect produce, and a lot of farmers paid the price for that perfection. Many men and women died to provide unblemished food for our tables.  The United States as a culture seeks perfection in everything, and no one person is strong enough to stand up to that culture, but fortunately, we have a more educated consumer today.

Apples symbolize home and love and family. There is no other fruit that speaks to us on such an emotional level, marking the seasons with promise and mystery, and that bittersweet feel of a beautiful fall day when the shadows hitting the ground are black and sharply defined, when the air carries with it a loamy, ephemeral scent that smells like the perfume of our lives, and we can feel our history and our future in that single, magical day. In one beautiful apple.

So visit an organic orchard. Pick an apple. A deep red one. Polish it on the leg of your jeans.  Hold it in your hand, and enjoy its beautiful imperfections.