WHERE DOES THE TIME GO?

It's been a busy few weeks, and I'm finally getting caught up. Went to NYC. Got home. Edited galleys. Shipped galleys. Got sick. Cold. Asthma. Found my old inhaler with expiration date of 2006. Used it. Got better. Once Upon a Crime book signing yesterday in Minneapolis. Lovely dinner last night with writer friends. Back home. Corpse Kitty wouldn't let me sleep in. Relax...

One thing I keep wondering: Does it make sense to blog? It seems that most of the people who read my blog follow me on Facebook, so I wonder if blogging is redundant. But the big advantage to blogging is that the posts don't vanish or roll off the page in a matter of minutes. But Facebook is just so much faster. And feels less formal. And people can share what you post. And people are more likely to comment. So I don't know.

But anyway, here's a bit of my New York trip that I posted on Facebook a while back but am now posting here. And I'm not even going to try to catch people up, just drop you in the middle of a scene. Because I'm lazy that way.

The cocktail party: the CEO of Hachette introduced all four authors, me, Joel Salatin, an organic farmer, Jerry West, NBA star, and Lemony Snicket. Then the publisher of Grand Central introduced me. So glad I was up first. So nervous for days, but once I was up there, I wasn't nervous at all. But definitely one of the weirdest evenings of my life. It felt like I was in a Truman Capote movie. Not In Cold Blood, but Breakfast at Tiffany's. 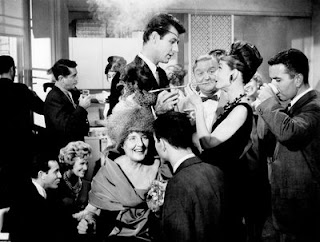 Almost all of attendees had already read my book. (I thought I was supposed to tell them about it!) When I was finished, I sat down next to my editor. She handed me her glass of wine which I promptly chugged. Next speaker was Joel. I finally calmed down by the time Jerry West spoke. He's written an autobiography that will be out in Oct. I really want to read it. Then Lemony Snicket. He and his illustrator were droll and charming and hilarious. He shared a baked apple recipe with me that I must try. A peeled, cored apple and Tab. Their book comes out in about a year. It's a compilation of worst (or best) breakup stories. I'm sure it will be hilarious.

Before the event: Met my editor for lunch where we ate sushi and talked. (Hadn't met her before.) Then she took me to see the publishing house which was basically across the street. Super modern glass building with a very sleek, Swedish look with pale floors and walls and pale wood. Very crisp and orderly. I had to show an ID at a desk, get a photo taken before I could pass through a certain area. Elevators require a code and don't respond until you type in the code. then the box will show which elevator you should stand in front of, A - J. Elevator won't respond until it detects you in front of designated door.

Day after event: I met my agent for breakfast in a cafe attached to Grand Central Station. Once we were done, she invited me to see the Century Association. I had no idea what she was talking about, but soon I was following her through Grand Central Station and out into the street and right in the middle of the St. Patrick's Day chaos. OMG. OMG. We lost each other several times. Streets were closed. Green drunks shoulder to shoulder, shouting in unison for no apparent reason. Finally made it to the Century Association, a club that is basically for the artistic elite of NYC. Walls were lined with paintings of members old and new. Winslow Homer. Teddy Roosevelt. First edition books from floor to ceiling. Can't even describe it, but you can find a bit about it on Wikipedia.

Now somewhere in this chaos was my daughter. I was supposed to catch up with her so we could visit Central Park. OMG again. And I have to mention how glad I was that she came with me. I can't imagine trying to navigate NYC for the first time in my life without having her along. We finally found each other in Central Park. She'd spent the past few hours trying to escape the crazy green people, so we were both wiped out and had probably walked miles by that point. But it was a gorgeous day! In the seventies!

No restrooms. A gazillion people in the streets, and no portable toilets anywhere. Restrooms in Central Park were locked. So we went to the Metropolitan Museum of Art and and paid $15 to pee. While we were there, we checked out Guitar Heroes and some mummies.

And then the train ride back to the hotel. Another OMG Really, I just wanted to laugh. The trains were so packed that the doors wouldn't shut because asses were hanging out. I mean real asses. And the people would stand there blank-faced while the door continued to close and open on their butts.
Posted by Anne Frasier at 8:59 AM