What's this about arsenic in apple juice? 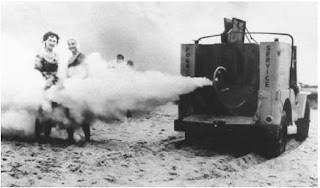 Several people contacted me the day the Dr. Oz arsenic episode aired, asking what I thought about it, wondering what I knew about arsenic in apples.

When it comes to pesticides, we can follow a history of chemicals being introduced into the environment, then later banned once the dangers are brought to light. This is kind of how it goes: When a pesticide is banned, notices are sent out, and farmers are made aware of the ban long before it takes place. This gives them time to stockpile the banned substance, which they can legally use for a time after the actual sale and production of the product ceases.

The alarming thing about lead arsenate is that it doesn’t go away. Do an online search and you will find more than you want to know about soil and well contamination from lead arsenate. So if you’re thinking of buying ground that was once a charming and beautiful orchard, get the soil tested. Get the well tested.

It’s a given that most apple juice contains a certain level of carcinogens. After all, apples have been named the most pesticide-laden fruit in the country. All you have to do is look at how cider is made to realize that unless you’re buying juice from an organic orchard, the juice you’re drinking most likely contains toxins. Yes, apples are usually run though a cold-water rinse before being ground—skin, seeds and all—to make cider, but cold water alone doesn’t do a lot to remove pesticide residue. And apple seeds, in a high enough dosage, are toxic. Cheers.

Due to my book-tour schedule, the comment section has been shut off temporarily.
Posted by Anne Frasier at 12:27 PM