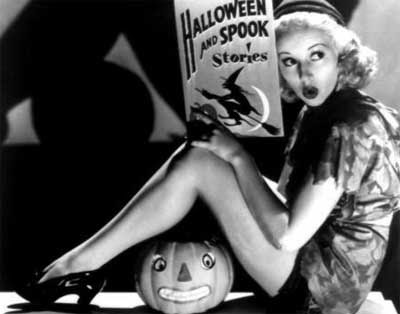 (I tell this story every Halloween.)

The word "doppelgänger" has come to refer (as in German) to any double or look-alike of a person. The word is also used to describe the sensation of having glimpsed oneself in peripheral vision, in a position where there is no chance that it could have been a reflection. They are generally regarded as harbingers of bad luck. In some traditions, a doppelgänger seen by a person's friends or relatives portends illness or danger, while seeing one's own doppelgänger is an omen of death. In Norse mythology, a vardøger is a ghostly double who precedes a living person and is seen performing their actions in advance.

When I was fourteen and my younger brother was eight, we lived in an isolated desert town in southern New Mexico. My brother stood out in the largely Hispanic community because he had straight white hair and pale skin.

My brother was going as a vampire. He and my mother were in the bathroom where she was putting on his makeup. I stood watching in the doorway. We were chatting and laughing. Someone knocks at the front door.

I leave the bathroom, go approximately ten steps, turn on the porch light and open the door, expecting an early trick-or-treater. There is my brother, standing at the bottom of the steps dressed in his black cape. No bag in his hands. Nothing on his head. His white hair. No cars around. No people. No trick-or-treaters.

My mind is struggling with the impossible logistics of the situation. I’d been looking at him in the bathroom when I heard the knock. I ask how he got outside. Terror in his eyes. I ask, What's wrong? He runs beyond the circle of the porch light, into the dark where he seems to vanish. I rush those few steps to the bathroom to tell my mom. To find out how they pulled off such a trick. There they both are, just as I left them.

This is a very small, one story house. less than 1,000 square feet. The bathroom is just a few paces from the front door. It has a window above the tub, but it’s one of those high, crank-out things, almost to the ceiling, and very small. If my mother had been able to stuff my brother through the window, he would have dropped six feet on the other side, then he would have had to run around the house to get to the front door. Then he would have had to run back, somehow scale the wall, squeeze through the tiny window, and return to makeup position in the middle of the bathroom. A trick that a rehearsed team could have possibly accomplished in five or ten minutes, but certainly not the seconds I’m talking about.

Over the years I’ve replayed the event in my mind hundreds of times, but have never been able to come up with a logical explanation. I've asked my brother if it was a trick, but he always gives me the same puzzled and confused look he and my mother gave me that night. I’m the only one who saw my brother’s doppelganger.
Posted by Anne Frasier at 5:46 AM