I've been working hard, getting my old romances formatted for Kindle. I've got two more uploaded.  It's been weird editing these old titles. By editing, I mean proofing them for scanning errors. I didn't change anything. But it's weird, because it takes me back there, to the time I wrote them. These two titles feel like three or four lifetimes ago.

Which is why I'm offering them both for free for a couple of days. Grab 'em while you can.  (Click on titles to take you to the Amazon page.)

I love the new covers designed by my daughter! Gorgeous!!

Below is my current take on each book: 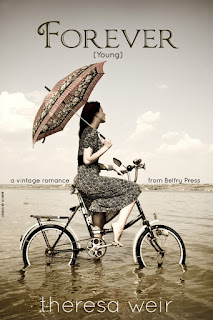 First printing: 1990
Reissued by Belfry Press
This is a hybrid of romance and women’s fiction; it contains sex scenes.
Heat rating: 5 out of 10

From the author:
This book kind of makes me squirm. Which is really weird considering the fact that I wrote it. Twenty-two years ago. When I was a kid. I’d loved the play Flowers for Algernon, and the movie Charly, starring Cliff Robertson. If you recall, he was a guy with a low IQ who drank (shot up?) some scientific formula while wearing really dorky clothes like shirts with big collars and beige stretch pants, and he became super smart, then fell in love with his doctor and they had sex. And he was so smart that he figured out he would eventually become unsmart again.  So anyway, Forever has that icky thing going where it’s a patient/doctor relationship that makes you feel a little uncomfortable.  Kind of yeah, do it. Then wait, she’s his doctor.  And mentally he’s nineteen.  But at least he’s not twelve like Tom Hanks in Big.

Because it’s about a GUY WHO LOSES HIS MEMORY AND GETS A SECOND CHANCE BECAUSE LOSING HIS MEMORY MAKES HIM YOUNG AGAIN.  THAT’S WHAT THE STORY IS ABOUT. But the publishing house changed it to FOREVER, and they blurbed it with stuff about these two people meeting and falling in love. And I’m guessing they were so much in love that their relationship probably lasted FOREVER.
******
From the book:
Sammy looked up at her, an all-too-familiar bleakness in his dark eyes. “Funny, isn’t it? The way we thought we were so indestructible. That nothing could touch us.” He shook his head, seeming stunned by it all. “We thought we’d stay young forever.”
******
YOUNG FOREVER!!!!!!  Ding!!

I might have rated this higher years ago, but here’s my 2012 rating for FOREVER:

3 out of 5 stars
FYI: FOREVER (YOUNG) is the prequel to ONE FINE DAY, which is a better book. 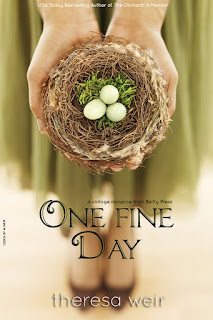 Vintage romance
First printing 1994
Reissued by Belfry Press
This is a romance: it contains sex scenes
Heat rating: 8 out of 10

This is the second of two books. The first is Forever, but One Fine Day easily stands alone. During the early nineties, romance publishers were experimenting with hybrids, books that were a combination of romance and women's fiction. One Fine Day was one of those books. This experiment didn't go over that well, because the hybrids stepped too far outside traditional romance for many romance readers, while at the same time containing too much romance for women's fiction readers.

From the author:
It's been odd proofing these old titles. Brought back a lot of memories, some not so pleasant. I recalled that One Fine Day was the book that broke me. That broke my writer's heart. I poured so much into this book, and even today I would say it's a fairly strong read except for a chapter I call the sexcation. I was tempted to remove it this time around, but decided to keep the original book intact, flaws and all. So skip the sexcation if you like. You'll know it when you get there.

The publishing house I was with at the time of writing One Fine Day wasn't supporting my titles. They felt kind of meh about me and just as meh about my books, especially One Fine Day. Another house wanted to publish One Fine Day, but after some hand-wringing I decided to stay with the house that felt meh about it. A bird in the hand and all that. I'd already experienced moving to a new house only to have the editor depart as soon as my contract was signed, so I was gun-shy when it came to being courted. But in retrospect, I can see that staying was a bad idea. The book was released with no backing, and from that point on I didn't try. I just couldn't put myself out there any longer. I couldn't connect with the stories knowing I was writing more throw-away titles---as these neglected books were called in the biz. This sounds horribly melodramatic, but it's hard to write with a broken heart. Other writers will understand what I'm talking about.

I wrote five more romances after OFD, but I kept my distance and stuck to tried and true formulas. And I erased this book from my mind. Tried not to think about it ever again. The other writers who were doing these hybrids with little success either quit writing and vanished, moved into suspense, or moved into straight romance. I eventually moved into suspense.

Romance readers are always asking if I'll ever write another romance. It's really hard to go back there, even for a few days, so I don't know. I'm working on a trilogy about cats. It's kind of a romance, but not in the traditional sense.