THE INSPIRATION FOR MY CAT BOOKS

With the release of Geek with the Cat Tattoo, people have been asking if I have a cat. "You must have a cat! You know them so well!"

This is kind of a downer, but I thought I'd rerun a post from two and a half years ago. My cat of twenty years was the inspiration for the Cool Cats books. He and I actually had a conversation about it.

"I should write a book with a cat narrator," I told him. "What do you think? Maybe a romance. Readers have been asking for another romance."  Of course he thought it was a great idea.

It's very strange, but I don't think I've gotten over losing him even though it's been more than two years. About a month after he died I had to fly to promotional events for Grand Central Publishing.  A book gig in New Orleans was the first time I'd left the house, and I suddenly found myself at this long table at a fancy fancy fancy restaurant where each meal must have cost several hundred dollars.  I was supposed to perform, but I just wanted to be home with the covers over my head. Weird to look back and realize I've been kind of shut off since then. Or at least not fully turned on. :D

To preface the following: I sometimes tweeted as him and called his tweets kitty memoirs.

“Yesterday I was put to sleep.” Kitty memoir

It shouldn’t hurt this much, but it’s like the death of a person. I wish I’d waited one more day. And one more day. I retrace the past week, I examine and wonder, and see the days through a different lens every time I look at them. One minute I think I waited too long, years too long. Another, I think I didn’t wait long enough. I wish he were with me right now. That’s all I know.

He was old. Almost twenty. 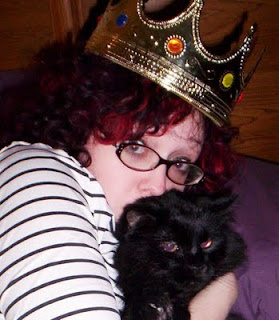 The last animal from what I call our old life, the life on the farm.

He loved it when a group of people got together and sat around talking and laughing. He loved the sound of laughter.

He showed up on our farm as a kitten, probably a dump.
“Don’t touch it,” I told my daughter, who was already mentally cuddling the animal. “It might have some disease.”
“It has devil eyes,” my husband said. “Look at how it’s looking at me. Making eye contact.” There was fear in his voice. “Don’t feed it and it’ll leave.”


But the cat didn't leave, and we began calling him Latoya, thinking he was a female.

He hung around the corncrib and caught mice.

One day I found him there, sick. I took him to the vet.
“Pneumonia,” the vet said. “Never seen a case this bad. If he lives, he’ll always be in bad health.” I found out he was a boy, not a girl.

So I took him home and put him in a box in the basement.
“I don’t want that devil cat in the house,” my husband said.
“What is he going to do? Put a spell on you?”
“Maybe.”
The cat recovered and he was returned to the outdoors. I got him neutered, but we continued to call him Latoya.
He was always around. In the field near the house. In the evenings, when I went for a jog, he would follow me, get tired, and wait in the roadside ditch for me to return, then follow me home. I fed him, and he became my cat.

In 1994, I went on a trip.
“Don’t forget to feed Latoya,” I told my son and husband. “I don’t want him roaming, searching for food.”
While I was gone, my husband accidentally ran over Latoya with a sickle mower, a mower used to trim ditches. He was so mangled that he should have been put to sleep, but my son coaxed him out of the culvert where he’d gone to die. The vet did what he could. “I don’t think he’ll live, and he’ll never walk or use the litter box. Take him home, but you’ll probably need to have him put down.” Poor Latoya had two and a half legs, and half a tail. They’d shaved him, and he was as naked as a mole rat.

Over the next month, pieces of him fell off, but he slowly recovered, and the devil cat became a housecat. My constant companion. 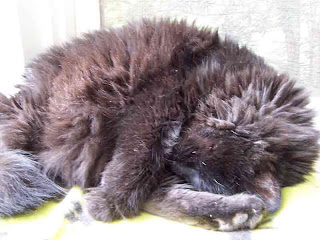 He had no trouble getting around, and could even run and climb a tree if taken outside. Like the vet said, he had respiratory issues off and on his whole life. But he lived and lived and lived.

Two years ago, he was diagnosed with hyperthyroidism, but he couldn’t tolerate the medication. And as time passed, he got so he could no longer go up and down the stairs to sleep with me in my bed. His weight dropped from sixteen pounds to five. 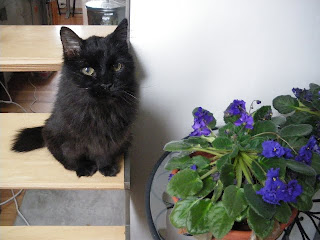 I would spend evenings downstairs in the living room with him, watching television. He lost his hearing, and began to yowl if he thought he was alone. The social butterfly. A few days ago, my daughter came by and we realized he could hear us, and he enjoyed sitting with us as we talked and laughed. He still loved the sound of laughter.

This day has been coming for a long time, but I didn’t know it would hurt so much. He was a cat. A cat. But it feels like the death of a person. I don’t understand how humans bond so strongly with their pets, but it’s something profound and crazy and painful and maybe beautiful. I’m not sure about the beautiful. It hurts too much for beautiful.

Twenty years. He was with me through the death of my husband, my move from the farm to Iowa, my move to St. Paul, my move to Wisconsin. In the past several years, he required constant care. Because of that, my adult children and I took him with us when we went up north and stayed at a cabin for a week. I’m not sure if he enjoyed it, but he took it all in stride, the way he did everything. 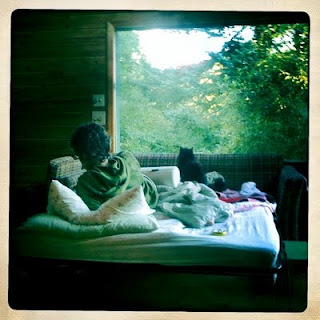 Latoya and me at cabin in northern Minnesota, 2010
(Yes, he even came with us on a family vacation.)


I’ve had a lot of cats in my life, but he was special. Unique and almost human. I can’t believe he’s gone. The house is so empty. There’s a giant hole in my heart that I don’t think any other pet could ever fill.
Posted by Anne Frasier at 12:30 PM

Email ThisBlogThis!Share to TwitterShare to FacebookShare to Pinterest
Labels: Geek With the Cat Tattoo, writing