A VERY ROUGH SYNOPSIS OF A BOOK THAT WON'T BE WRITTEN 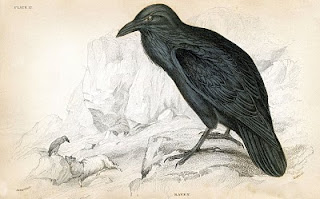 My old publisher wasn't interested in a third book, and I seriously doubt I'll ever write it, so I decided to post this rough synopsis. Keep in mind that I write a horrible synopsis. This was more an outline written for my own benefit, and much of it won't make sense if you didn't read Pale Immortal or Garden of Darkness.

FYI: Digital versions of Pale Immortal and Garden of Darkness can be purchased through Smashwords.

THE NIGHTBIRDS
Synopsis
Book 3 in the Tuonela series

Every tattoo tells a story. Of the land of the dead and the nightbirds. Of Michael Fontaine’s upcoming death.
Michael began tattooing himself in his early twenties. Now his body is a story of the past and the future, the story of Old Tuonela and new Tuonela, of dark events yet to unfold. "Don't love me," he tells women. Not because he won’t stick around, not because he isn’t interested, but because he knows his days are numbered.

Evan Stroud and Rachel Burton have at last found happiness and are living a relatively normal existence in spite of Evan’s disease and his allergy to sunlight. But Evan and Rachel’s newfound fragile relationship is built on unstable ground. Evan has more than a disease -- he is part revenant and part Pale Immortal, and he keeps his dark side suppressed with drugs. Rachel is in denial about her own lineage and their baby’s aversion to light.

Evan’s father moved back to Florida, and Evan and Rachel have returned to the house in Tuonela, the house on Benefit Street. Alastair Stroud’s job as Chief of Police was filled by a young outsider named Michael Fontaine.

One evening Evan and Rachel go out for dinner. Upon returning home, they find the sitter dead and their baby kidnapped.

After baby Aiden was born, Evan and Rachel discussed leaving Tuonela to start over in a new town with new names so the baby could have a normal life. But in the end they decided the child was safest in Tuonela where everybody understood their situation and for the most part accepted it. Wrong decision.

Graham Stroud and his girlfriend Isobel are touring prospective colleges when Graham gets the news that Aiden has been kidnapped. He drops everything and returns home to Tuonela.

Police Chief Michael Fontaine has secrets of his own. He spends his evenings tattooing his flesh with the visual story of Old Tuonela, a story that his police uniform hides. From the time he was a small child he drew pictures of people he didn’t know and a place he’d never seen. When he got older he apprenticed under a tattoo artist and began tattooing his collection of images on his own flesh. Research finally placed his family in the area of Old Tuonela at the time of the mass exodus, and he realized the images and people were from that dark past. And he suspects he might be a descendent of the Pale Immortal, descendents he calls nightbirds. Outsiders, lost souls who walk in two worlds.
How many of them are there?


Kidnappers leave clues and ransom notes, but they are nothing more than false leads meant to keep any remaining legitimate police tied up with misinformation. Aiden is safe and alive, hidden underground, below Tuonela.
Fontaine is active in the investigation, but Rachel doesn’t trust him. Not only is he an outsider, she senses that he has secrets. Dark, deep secrets, and she even suspects that he may have been involved in the kidnapping.
But Fontaine is innocent.

The mayor of Tuonela is behind the kidnapping and murder. He knows the baby is the offspring of a revenant and the great granddaughter of the Pale Immortal himself, and he knows the child is the key to a race of immortal beings. He’s convinced he’s doing what’s best for the child and what’s best for the town. He’s hiding the baby from darker powers while a team performs tests on the infant hoping to unlock the secret to their own immortality.

Tuonela corruption runs deep. The mayor and his helpers fake the infant’s death with the body of a dead baby they’ve robbed from a grave. Many of the townspeople are in league with the major, and by switching DNA they are able to “prove” that the dead infant is Evan and Rachel’s child. At the funeral the mayor tells the grief-stricken couple that they must move on, and that they can have more children. Evan refuses to accept that the child is gone, lunges for the mayor, but is stopped by the sunlight.

Evan, who belongs more to the land of the dead than the land of the living, controls his darker cravings with the constant sedation of powerful drugs. The kidnapping and death of his child sends him spiraling into despair. The drugs are abandoned and he becomes the one he has always feared becoming – the Pale Immortal. Even his love for Rachel isn’t enough to save him this time. He vanishes into the darkness, and his shadowy form is spotted along country roads and in the heart of Tuonela. The townspeople are terrified and no one remains on the street after the sun goes down.

Kristin Blackmoore came to town for the funeral, and ends up drawn to Michael Fontaine. She spends the night with him, but doesn’t see his tattoos because he insists upon having sex in the dark. She has died more than once in her young life, and something about Fontaine speaks to the part of her that has experienced the other side.

In the morning, Fontaine is dressed in his uniform when Kristin wakes up. But as his fingers nervously hurry over shirt buttons, she catches a glimpse of black ink and he finally lets her see what his clothes have been hiding. Skin as art. Skin as history.
Every tattoo tells a story….

Rachel begins to feel uneasy and distrustful of the DNA test results, and asks that her child’s body be exhumed. When she can’t get permission, she and Graham dig up the infant’s body in the middle of the night. She takes DNA samples, sends them to the lab, and discovers that the baby is no relation. Which gives her hope that her child is still alive.

She tries to find Evan to tell him the news. She can feel him watching her in the woods. He attacks. The information about the baby means nothing to him. He is no longer Evan but some mad creature. Rachel escapes, and once home she begins to plot how she can catch Evan. It will take light and restraints. A cage to lock him up.
Evan is no longer Evan, but a being very close to the Pale Immortal. He attacks a young girl and is arrested and put in jail by Michael Fontaine.

Fontaine has very little space left on his body, but he adds one final tattoo – this of a dying man with nightbirds above him, waiting to carry him off.
Fontaine discovers the mayor is behind the kidnapping. He knows he can trust very few in Tuonela, so he decides to enlist Evan’s help. Unsure if drugs will subdue Evan’s darker side, he sedates him and waits for signs of a change.
Could this new person be the old Evan? Or evil in disguise? Fontaine takes the chance. He and Evan rescue the baby, but Fontaine is killed, his premonition coming true. The mayor and his henchmen are arrested.

When Fontaine’s body is on a slab in the morgue, Rachel discovers the tattoos. The history of Old Tuonela. The great exodus. The birth of her child. Fontaine’s death.
And people. Many other people. The undead. The nightbirds.

Every tattoo tells a story.

Evan will write the history and the truth of Tuonela. It is time. All secrets will be revealed. And more people like Fontaine will come, looking for answers, looking for their roots.
And many will stay.


Author’s note:
If you are someone fortunate or unfortunate enough to find Tuonela on a map—and if you go there—you might really be returning home. You might be a descendant of the Pale Immortal.